After graduating from the Royal College of Art in London, the UK-born designer and director Henry Hobson started working at Why Not Associates in London, doing everything from sculptural objects and designing postage stamps, to title design.

A series of commercials he created for the BBC got him on the radar of Prologue, Kyle Cooper’s studio. Hobson was “snapped up and transported out to L.A.,” he says, where he worked as a creative director and graphic designer on a series of distinctive title sequences that combined old school analogue handiwork with cutting-edge digital techniques, including Rango, The Walking Dead, Robin Hood, Fright Night and Sherlock Holmes.

In 2010 Hobson left Prologue to pursue other creative avenues with a live action emphasis. He directed a viral teaser for Resistance 3, and lately titles for Snow White and The Huntsman. Hobson is currently busy working on prepping his first two feature film directing projects: Maggie is set to shoot in 2012. “It’s a tough emotional zombie drama with a highly original twist, set to star Chloe Moretz and Paddy Considine,” says Hobson. “After Maggie, I have a film set up at 20th Century Fox Studios called Caves of Steel, which is based on the Isaac Asimov book.” 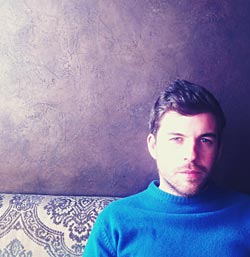