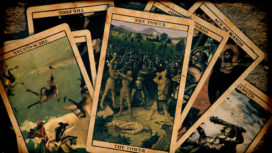 Creative director Erin Sarofsky reminisced about her own high school years and came up with the idea to create a title sequence based on the cootie catcher for TV show Community – comedy series about students at a community college in Denver, Colorado.
“Community college is considered an extension of high school in the US, also known as 13th grade,” says Erin Sarofsky. “So I circled around the amateurish aspect of the characters and the setting. I immediately started reminiscing about high school and brainstorming all the different things you might have found in my locker… Notebooks, trapper keepers, chewed pens, notes passed in class, doodles. I also considered also the actual place… Filled with bulletin boards, linoleum tiles, cafeteria food, bleachers, carved wooden desks. But what really stood out for me were the silly games we used to play… MASH, Dots, Hangman and the Cootie Catcher.”

“We landed on the cootie catcher because it was a great metaphor for the show overall and it provided the perfect paper canvas to display credits, which are surrounded by doodles that are unique to each character.”

On the tech side of things, Sarofsky explains that the cootie catcher was created in Softimage XSI and composited with After Effects into the library set. “The drawings were all done with a Blue Bic Cristal Ballpoint Stick Pen on an actual cootie catcher. Then they were scanned and placed onto the surface of the cootie catcher in 3D.”

I asked Sarofsky about her favorite title sequence, but she doesn’t have one. “I love watching title sequences though. But more so, I love pitching titles and seeing what’s ultimately produced… Win or loose. The process of watching a show, coming up with the perfect way of branding it and having a slew of producers, writes, directors and network people all in agreement is a real achievement.”

“I do have a favorite music video,” she says. “’A-Ha’s “Take On Me!’ I was in junior high and had just gotten a TV in my bedroom. I waited with the VHS machine cued up, ready to hit record when that video came on. After it recorded, I watched that VHS recording over and over, completely entranced. It was the first time I saw design and animation as something more than Tony the Tiger or Tom and Jerry. It was beautiful, artistic and was an essential ingredient to telling the story.”

Watch Superman/Batman: Public Enemies by Sarofsky Corp. over at Art of the Title.

Another excellent main title by Sarofsky Corp. over at Art of the Title