The DC Comics superhero character Green Lantern originated from the 1940s, was re-invented during the Silver Age of Comics, and starred in the action-packed animated feature, Green Lantern: First Flight. 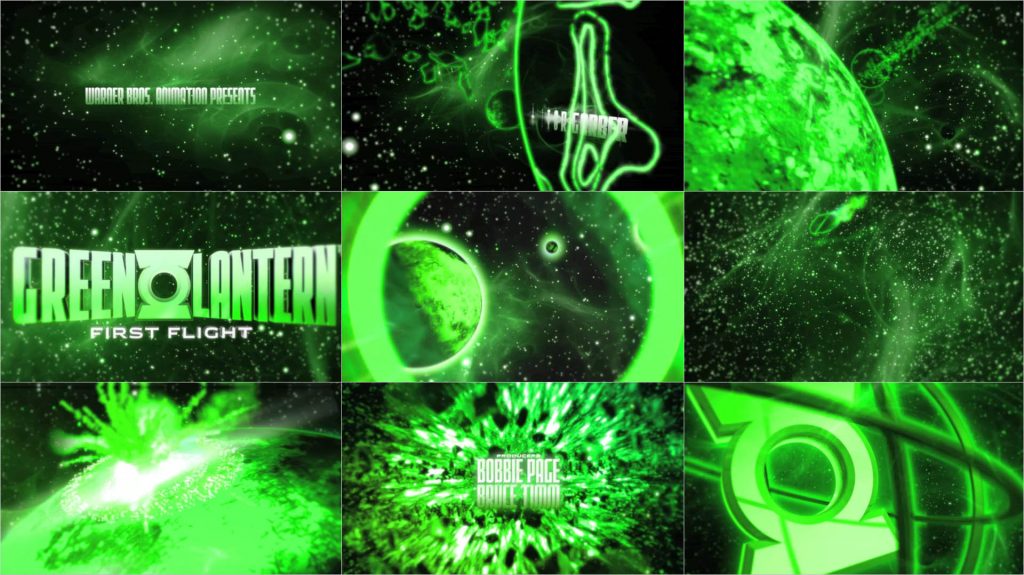 The Green Lantern is a member of an elite Corps of intergalactic policemen responsible for maintaining the peace in the universe. The source of his power lies in a special ring which, in turn, relies on a lantern-shaped battery. The backstory and origins of the character are briefly re-told ahead of the opening sequence, which don’t feature the Green Latern character, but focuses on the power ring. “The general idea was basically to follow the ring as it moves through the galaxies, all seen from the ring’s viewpoint,” says L.A.-based motion designer Castleforte, who designed the opening titles.

Were you familiar with the Green Lantern character before they asked you to do the title sequence?
Castleforte: “Oh for sure. I am a huge comic fan. I was very excited when I was approached by Warner Bros Animation to do this title.”

The title sequence effectively conveys the science fiction/action theme. What look-and-feel were the producers and yourself aiming for?
“Well, the producers were very set on the black and green motif, to match the Green Lantern’s colors. We initially thought about adding additional colors that would hint to the villain and other aspects of the film, but in the end it was decided that it gave too much away.

We used the Morgan Tower and Raleigh Gothic typefaces, with the intent of giving it a strong, clean, comic-sci-fi look without making it feel too cartoony or campy. “

Could you explain the process of creating the title sequence?
“The initial concept was developed by Peter Girardi of Warner Bros. Animation, and myself. Peter also designed the final logo. I designed the initial look frames in Cinema 4D and Photoshop. Then, due to schedule constraints, I decided to bring in a production team, my friends at 2Veinte. Together we hashed out the rest of the storyboards for approval. I then proceeded to block out the motion for timings and overall camera moves, and handed them over to 2Veinte. They proceeded to do an amazing job of bringing the frames to life, using Maya, Cinema 4D and AfterEffects. The rendered sequences were then returned to me for final compositing in AfterEffects. And finally, it was turned over to Warner Bros. Animation for final color correction and music.”

Castleforte is an established artist and motion graphics designer/animator based in Los Angeles. He creates motion graphics for television and film, designs iphone games. Castleforte also had a hand in the brilliant Daredevil title sequence.

Title design and animation for WB Animation by
Castleforte