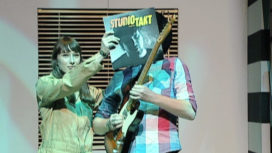 Retro with a capital ‘R’. Done with an immaculate sense of styling, tongue-in-cheek and fun, Foreign Language is a music video by Dimitri Basil that emulates the title sequences of all our favorite 1970s action flicks and TV shows. You name it; Bond, Baywatch, Starsky & Hutch, Charlie’s Angels… But the cherry on top of this entertaining email interview with the young director has got to be the priceless Kubrick quote that Basil uncovered in a late 60’s Playboy magazine. 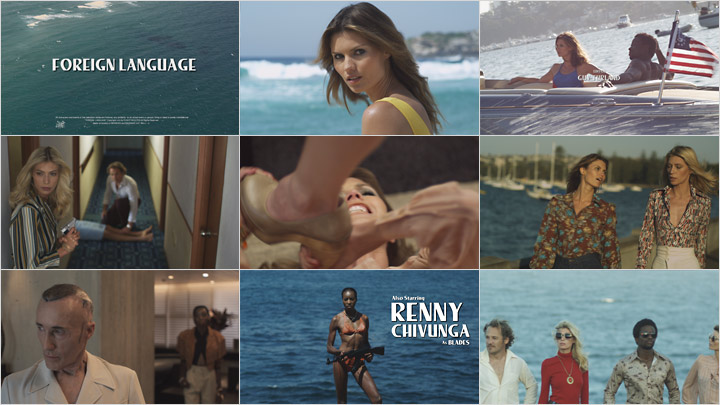 RV: How did you come up with the idea of making a music video in the form of a title sequence?
Dimitri Basil: “I always wanted to shoot a fictional movie intro, something along the lines of Saul Bass‘ or Binder‘s Work, but  when the opportunity came along, I decided to forget graphic, ethereal, abstract imagery and shoot instead the cheapest 70’s intro possible… mainly because of fun.”

The casting, the locations, the props, the costumes. Everything is just spot on. What was your initial concept, what were you aiming for?
“The idea was to hopefully confuse people into thinking that Foreign Language was a real long forgotten television show. 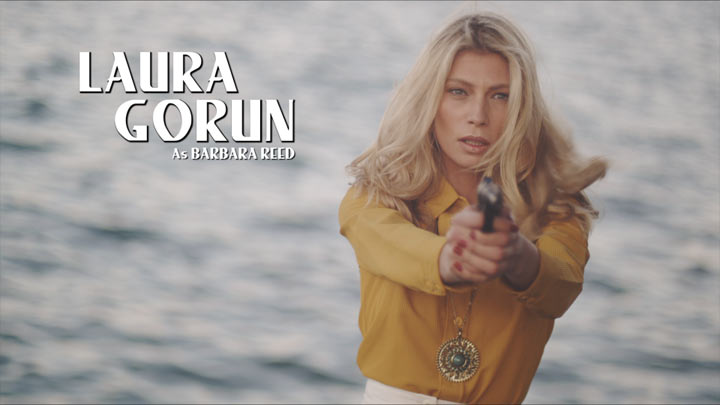 “I wanted to create a website to advertise a remastered Foreign Language DVD Box Set with all the episodes; and I didn’t just want to make a website advertising all that bonus material, I wanted to shoot it all: the outtakes, the interviews, a short documentary explaining the production, rise and decline of the show, the cast’s addiction problems, love affairs everything that wasn’t the actual show.

“The documentary was meant to be shot as a 35th year anniversary where all the crew and talent where actually played by older actors.

“I really wanted to confuse whoever was interested in Flight Facilities, and the truth is that it would have gone all the way with me and probably encouraged me to keep coming up with more absurd stuff. Unfortunately we had too small a budget and no time. We ended up just making the intro and forgetting all the “extras”.” 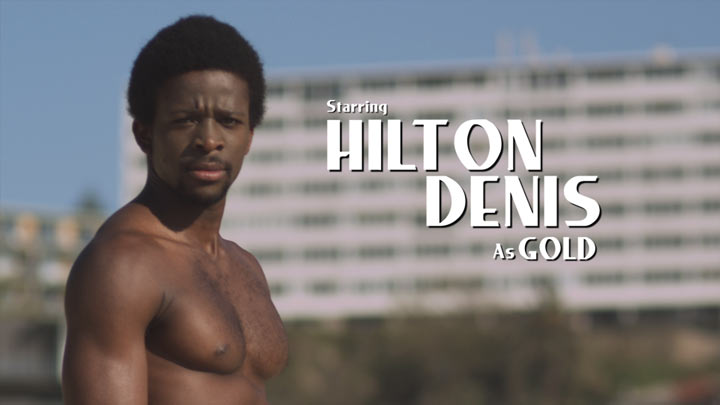 I think I see some Bay Watch, James Bond, Starsky and Hutch, Charlie’s Angels, Charles Bronson movies. Did you watch a lot of title sequences before you shot the video? Tell us about the movies, tv shows, titles that inspired you.
“All the ones you named, I really did watch them all. Boogie Nights and early James Bond films where my initial inspirations.”

You didn’t grow up in the late 70’s. What is the appeal of those movies and tv shows you’re referencing?
“I can’t really put it into words… The closest I can come to explaining it is by performing a contemporary dance…

“There is something so appealing to me about the past, especially the 60’s and 70’s. I guess it is the notion that it will never come back. 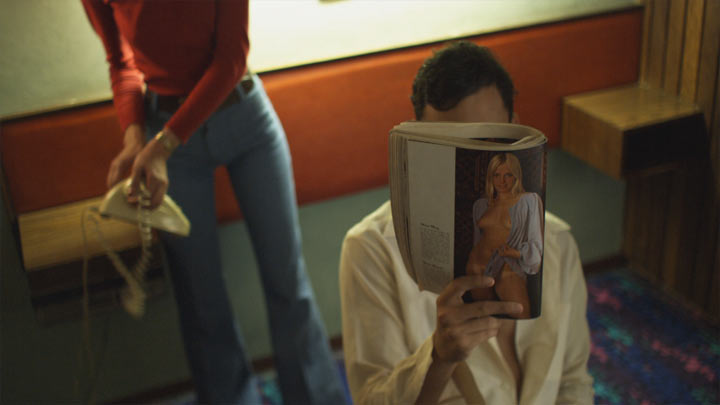 “I love where ever we were going at that time… i’m not saying they were better, it just seems like there were better ideas, it feels like we where moving faster. In my opinion we took a bad turn somewhere around the late 80’s but then again, my assumptions are based on a bunch of interviews and short stories I read on a late 1960’s Playboy magazine while researching for the music video. Here is an excerpt:

PLAYBOY: Speaking of what it’s all about — if you’ll allow us to return to the philosophical interpretation of 2001 — would you agree with those critics who call it a profoundly religious film?

KUBRICK: I will say that the God concept is at the heart of 2001 but not any traditional, anthropomorphic image of God. I don’t believe in any of Earth’s monotheistic religions, but I do believe that one can construct an intriguing scientific definition of God, once you accept the fact that there are approximately 100 billion stars in our galaxy alone, that each star is a life-giving sun and that there are approximately 100 billion galaxies in just the visible universe. Given a planet in a stable orbit, not too hot and not too cold, and given a few billion years of chance chemical reactions created by the interaction of a sun’s energy on the planet’s chemicals, it’s fairly certain that life in one form or another will eventually emerge. It’s reasonable to assume that there must be, in fact, countless billions of such planets where biological life has arisen, and the odds of some proportion of such life developing intelligence are high. Now, the sun is by no means an old star, and its planets are mere children in cosmic age, so it seems likely that there are billions of planets in the universe not only where intelligent life is on a lower scale than man but other billions where it is approximately equal and others still where it is hundreds of thousands of millions of years in advance of us. When you think of the giant technological strides that man has made in a few millennia — less than a microsecond in the chronology of the universe — can you imagine the evolutionary development that much older life forms have taken? They may have progressed from biological species, which are fragile shells for the mind at best, into immortal machine entities — and then, over innumerable eons, they could emerge from the chrysalis of matter transformed into beings of pure energy and spirit. Their potentialities would be limitless and their intelligence ungraspable by humans. 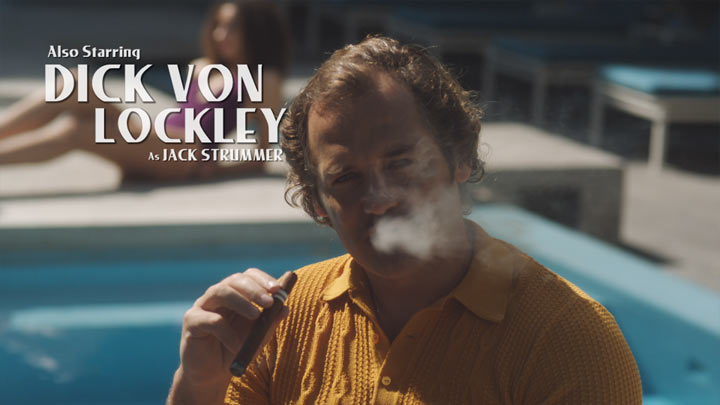 Did you have a story in mind when you were shooting, or was it all about creating sexy moments and capturing a specific mood and atmosphere?
“Initially we had a story in mind: two different teams looking for lost sunk treasure (Bounty hunters). In the end, while shooting it all came down to creating an atmosphere with whatever we had at hand.

Looks like the shoot was a lot of fun. What was the biggest challenge?
“The entire project was so much fun… we shot for 4 days in total.

“The last day of photography was intense. We finished shooting the pool scenes, drove 12 hours overnight to escape bad weather, jumped on a run-down helicopter for the aerial shots, filmed the fill-ups and when the camera was turned off we finally ran to the sea for a swim, all in the space of 24 hours…

“I was so delirious by the end of it all that I forgot my name and gender and for a second thought I was a woman. 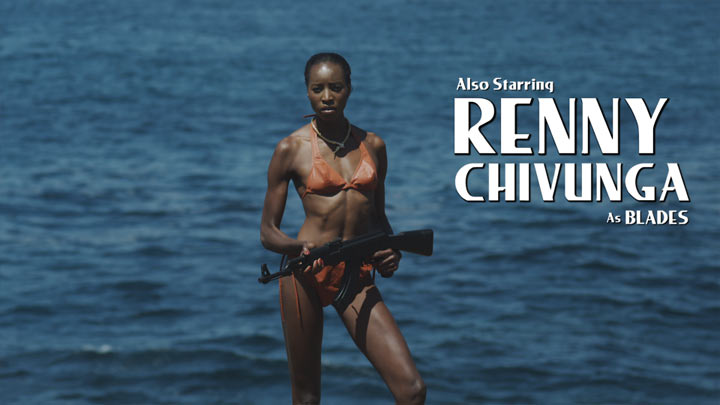 The choice of font is really important for this video. What font did you use, and why did you select it?
“I tried multiple fonts, everything that was designed before 1978. Most of the appropriate fonts created in the 60’s and early 70’s look too modern, so at the end I decided to go with Lee Bold designed I believe by Leo Weisz in 1974 for VGC (Visuals Graphic Corporation).

“How did you obtain that specific vintage film look that we all love? In post production?
“No post work, we got hold of actual 1970’s Carl Zeiss Super Speed lenses and shot with a Red One camera.

“Color wise we just adjusted the contrast to what seemed right. 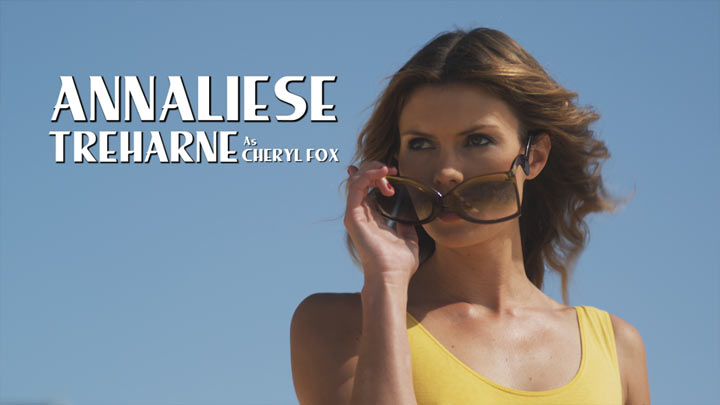 The budget?
“It was very small, but I think tight budgets can be liberating when you are willing to invest time on a project.

A young Rocco spent his childhood running amongst the vineyards of Bordeaux, Cerrone playing through his portable 8-track player. Living on the dreams of the past, Rocco packed his 24-track tapes, 33s, 45s and 78s into his drop top Lancia Beta, and made his way to Monte Carlo.

Escaping the night-charms of the Monaco, he eloped on a journey through Pollo Erotico into the future. Adjusting that Flux Capacitor nestled neatly between two scantily clad playmates, that flavour of musical jam that made women adulterate can now be consumed once again. 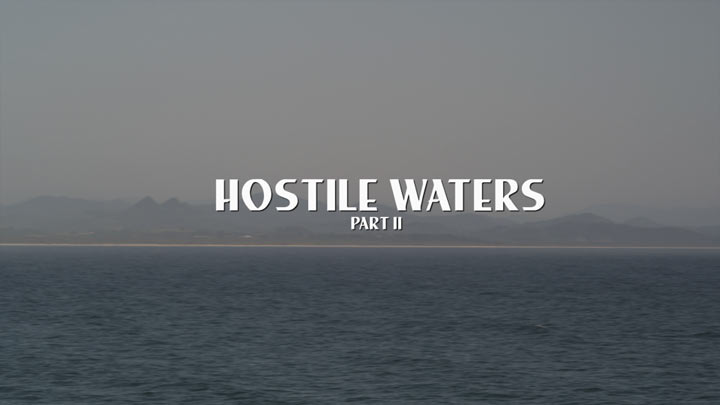 Sydney, Australia-based director Dimitri Basil was born in 1988 in the Amazons on the Colombian side. He quit school at the tender age of 13 to study Music, but ended up studying Film instead. “I would had loved to quit Film School too but couldn’t because I was on student visa. From my experience, it was only good to meet very good friends,” says Basil, who works as an independent filmmaker making shorts and music videos. And he occasionally does some acting.