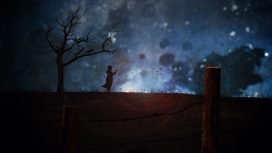 If you’ve seen the movie, you’ll know that this is not the official main title. The 21-year-old Dutch design student Jurjen Versteeg created this animation as part of a school assignment. We think it’s a great achievement.

“The school assignment was simply to create a title sequence based on an existing movie,” says Jurjen Versteeg. “I chose Into the Wild – a film that combines beautiful images with a nice soundtrack. The original title sequence wasn’t very good though, in my opinion, with the  two different fonts that morph into each other. I designed an alternative title sequence that recaptures the story of the film. It’s about venturing off from the big city into the wilderness and discovering all kinds of new situations and exciting new environments along the way.”

“Usually I work a lot with 3D and Photoshop. I use After Effects only for compositing. The execution of the project was done completely in After Effects, which was quite a challenge. I tend to use 3D to get the most out of certain elements of an animation. In this case, I used layers that were first cut out in Photoshop and animated, 2.5D style, in After Effects. The particles, such as the dollar bills and the snow, were created using the Trapcode Particular plugin. I found it interesting to discover that you can use After Effects to create a sequence with a 3D feel.”

on Into The Wild