The Troubles of Alfred (English title) is a film directed by Pierre Richard. Starring himself, he plays Alfred, a desperate and unlucky architect. In an attempt to drown himself, he happens to meet a female television presenter who has the same idea and the rest of the movie follows from this event. In making this movie, Richard has created a light and whimsical film which often resembles a cartoon. His character is innocent and clumsy by nature, often attracting trouble  and making him the victim of objects continuously   falling on him throughout the film. 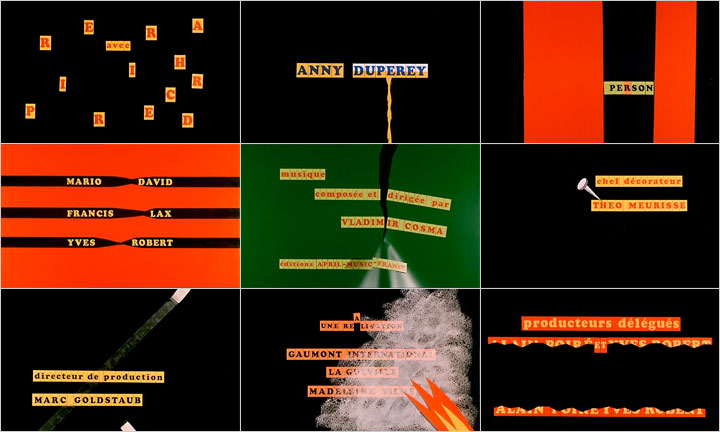 Unfortunately, the creator of the title sequence is not credited. My eventful search to discover his identity came to a dead end with only these words as final correspondence from the people that should know:”We can’t give you many details because this film is quite old and all the production files are archived. However I can tell you that Pierre Richard himself signed the direction of this film, and it was his second film as a director, after Le Distrait. Evidently, the collaboration with himself must have worked really well!”

This brings us back to one of the main reasons why Forget the Film, Watch the Titles was started – to recognize and pay tribute to the talent of title designers. But no matter how talented, I doubt very much that Pierre Richard was responsible for making the title sequence for his film himself.

This title sequence, with its childish features, introduces the naive and comical disposition of the film – a movie that highly resembles a cartoon in its humor. The simple and effective use of sound effects reinforces its lighthearted nature. Additionally, the graphic portrayal of the words strongly symbolize Architecture, Alfred’s profession. By changing the order of letters using methods such as a leaf tearing apart and tape that seems to be piecing itself together, his unintentional clumsiness is also depicted. The grunting sound effects may hint at the storyline whereby Pierre Mondy‘s character attempts to hurt Alfred, while the “Alfred!” whispered by female voices offers a clue to how appealing and ultimately irresistible he is, giving an insight to the romantic storyline and happy ending.

A reference is also made to the scene that follows the title sequence, the first scene. Anny Duperey’s name “suffers” a water leak, as you soon discover the meeting between her character and Alfred´s takes place in the water during their failed suicide attempts. This animation realizes the scene in advance.

The soundtrack to the sequence was composed by Vladimir Cosma. This composer has written over three hundred scores for various French films and television shows. Alexander (The Blessed), a film by by Yves Robert made in 1968, was his first project. 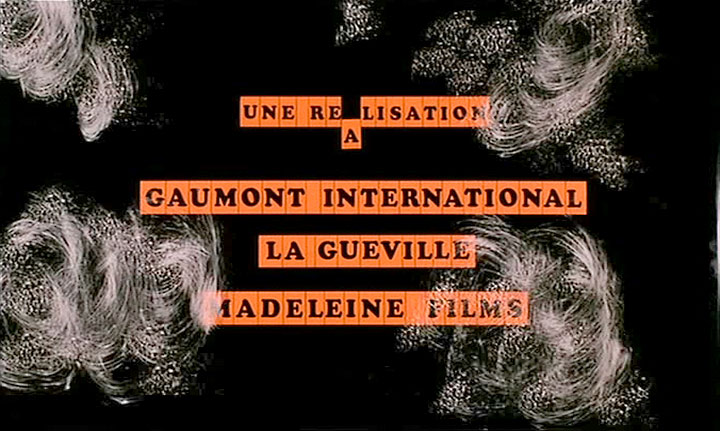 We bring a salute to the uncredited title designer. May your name be known to us sooner rather than later.

More about Not credited