THE TITLE SEQUENCE AS ARCHITECTURE

In the third edition of French Fridays on Watch the Titles, guest curator Laure Chapalain provides us with some fascinating insights into the main title of Mon Oncle (My Uncle) – one of the masterpieces of the acclaimed French director Jacques Tati. The title sequence comments on the effects on the architectural modernisation of post-war Paris. “Despite the simplicity of the opening sequence, its surprising radicalism succeeds in condensing the whole essence of the film into just a few seconds”. 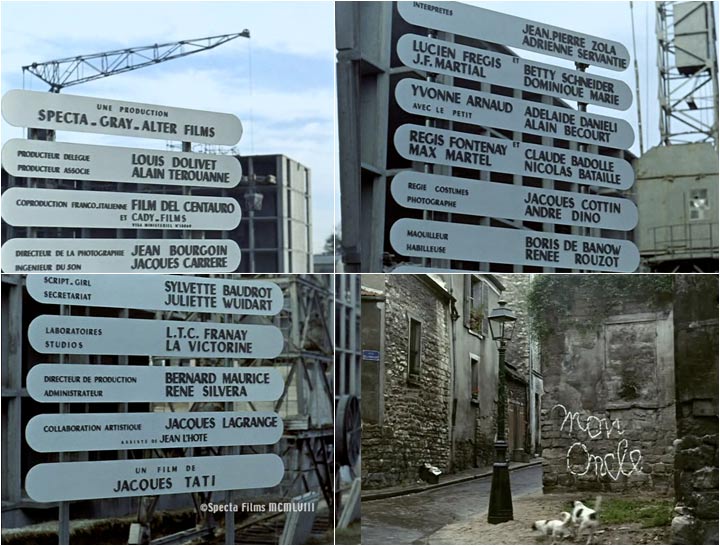 Set in the context of the Parisian post-war boom, the film recounts the effects of economic growth in France, and critiques the evils of the consumer society in the aftermath of the war.

The film presents a conflict between two worlds: the alienation of a technologically advanced new town where wealthy couple Gerard and Arpel live with their son, versus the charm and vibrancy of the old town, where Madame Arpel’s brother, one Mr. Hulot lives.

The character of Mr Hulot first appeared in Monsieur Hulot’s Holiday (1953) and is played by the director himself. He is entirely silent throughout the film, and his raincoat, pipe and hat make him instantly recognizable, evoking Charlie Chaplin‘s Tramp or a Buster Keaton character. He would go on to become the dreamy hero and fantasist of Tati‘s films and is one of the most memorable French movie characters. In Mon Oncle, Mr Hulot wreaks confusion on the orderly life of Arpels, especially once their young son develops a fondness for him.

Tati focuses on architectural elements to depict the two parallel worlds – the old and chaotic Parisian suburb versus an ultra-modern, gadgetized part of the city, which Tati built from scratch. He relies on the obvious visual difference between these two worlds to reflect the contrasting lives of the people who inhabit them.

Despite the simplicity of the opening sequence, its surprising radicalism
succeeds in condensing the whole essence of the film into just a few seconds. 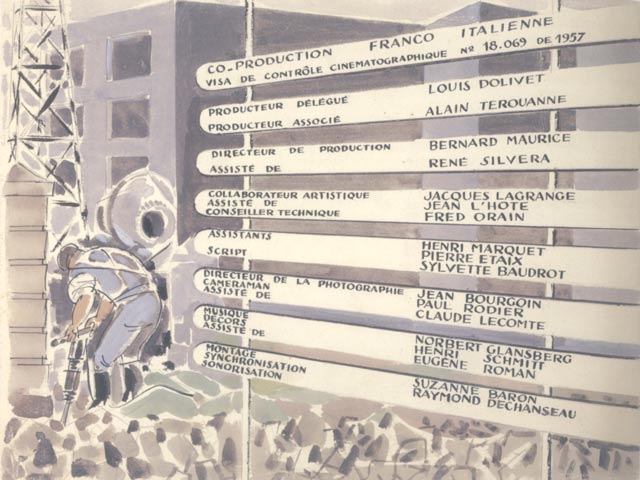 Made by Tati in close collaboration with gag writer, assistant director and storyboard artist Pierre Étaix, the main title immediately communicates that the film will address the consequences of architectural changes in France, as we move from the new city into the nostalgic old town, once the credits have finished rolling. A title sequence often immerses the viewer gradually into a film’s narrative – but here, we are thrown headlong into the story. Loud, aggressive construction noises, accentuate this effect, echoing the technical objects used by the Arpels. These first few moments do not necessarily evoke a comedic tone. We question, like Jacques Tati himself, the consequences of these constructions.

The title of the film is awkwardly written in chalk on a wall. Social prejudice, stray dogs, are accompanied by the Arpels’ dog, who urinates on the floor.

The credits provide the link between the two sites in which the action takes place. The gang of haphazard dogs and a small child take us back to a familiar, friendly and amusing place. Referring to the dogs, Tati once joked, “The presence of forty technicians waiting patiently as a dog deigns to relieve himself against a gas pipe, places me under great financial pressure.”

The title sequence consists of two construction panels shot from top to bottom, depicting a downward motion. The new city is still under construction. Using these construction panels, Tati and Etaix do more than merely contextualize the film. They present it as a building, with Tati – who always maintained a very special relationship with architecture – in the role of architect. 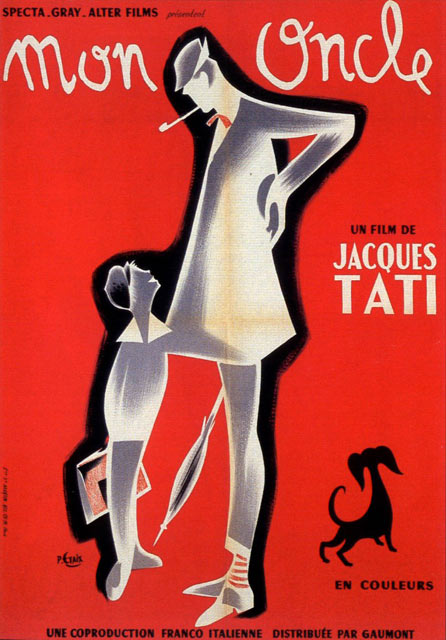 In his next film, Play Time, Tati did not stop at building just a set. He built the entire city Tativille, a mobile city created to suit the individual whims of the director. This would signify
the start of Tati’s path to financial ruin, and the downfall of his production company Specta.

About Pierre Etaix and Jacques Tati

Born in 1928, Pierre Étaix was a clown, filmmaker, designer, comedian,
magician, graphic designer, musician, director, stage designer, mime,
television personality, poet … He was heir to the great masters of
slapstick – Chaplin and Keaton. He got into directing with his friend Jean-Claude Carrière in the early 60s.