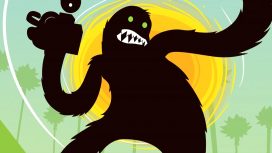 “Trekant was a short movie in the beginning. It won a prize in Berlin. I think then they decided to make it into a feature film, using some of the original footage from the short. The feature is still to be released,” says animator Oliver Conrad over the phone.

Besides the title sequence, Kompost also created several short animated scenes for the film that were used to further the story. Altogether, the feature film contains about 10 minutes of animation.

Conrad first made a few proposals. “We had to a very short time to do it so we had to come up with something very simple. And we had to come up with a way to be really quick in animating. As you can see the characters are only in side view. You never see them in front and they’re not turning their head or anything, so we could just work with 2D images. We basically came up with a couple of different styles and this was the favorite one. It’s nice and cute and fits the storyline.”

Trekant is teenage comedy about a guy who is still a virgin, but gets involved in threesomes. He feels really uncomfortable about it, because all he really wants is this one girl, but all she wants is to have threesomes.

“I used just one drawing for each character and then I colored it in with Photoshop. Then I cut it out and used After Effects to animate elements such as the legs and the head separately. The background is just ink and then colored in digitally. I created different layers so that it looks a bit like clouds. It’s super simple because all you have is the background, the triangles and then the character animation which is very limited. The animation is very basic. We had almost no budget at all, so I did the creative and production side myself.”