Hailed by many as one of the most memorable title sequences of 2007. The printing, hand-tracing, xeroxing, cutting and coloring of over 900 images of the main character Juno MacGuff walking through her neighborhood “took nearly supernatural patience,” says designer Gareth Smith of Shadowplay Studio. 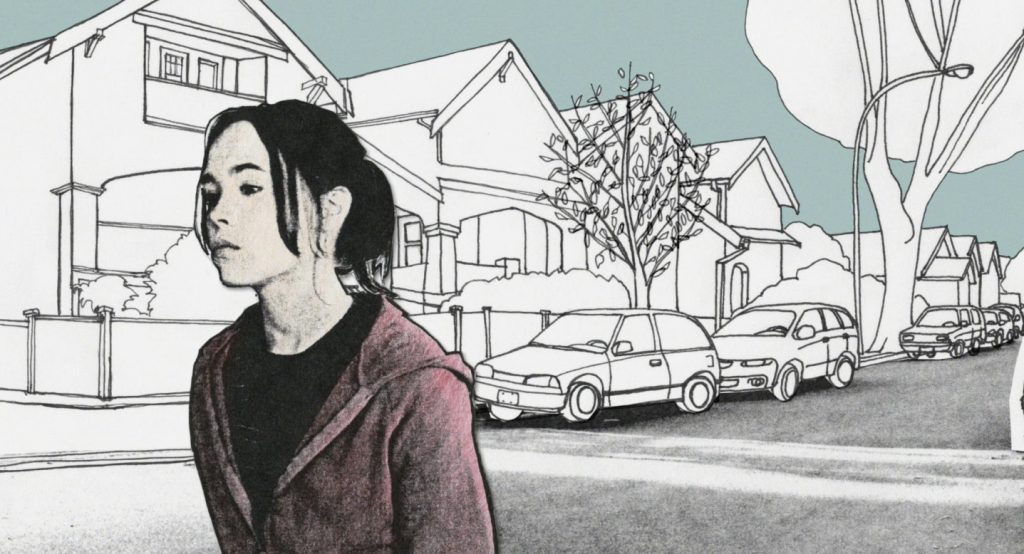 Reitman and Smith collaborated before. The opening title sequence of  Reitman’s debut feature Thank You For Smoking was done by Shadowplay.

Reitman, who has said that he’s a big fan of opening credits, brought the designers in on the project very shortly after he signed on to direct Juno.

Smith: “When we first met with Jason about it, he played some of the music he was thinking of using in the soundtrack, including Kimya Dawson‘s songs with the Moldy Peaches. This music, the tone and originality of the screenplay, and the uniqueness of Juno’s character, led us down the path toward creating a low-fi, hand-animated title sequence. We wanted to create something that had texture and a little bit of edge, but also imparted the warmth and heart of the screenplay.

“Jason Reitman also let us know that he wanted the opening title sequence to take place after the first scene of the film – the scene in which Juno is admiring a discarded living room set on a lawn.”

Shadowplay was able to start the process of designing the title sequence before the film was actually shot. “This allowed us to create something that integrated very nicely into the story-line of the film, ” says Smith. “It seemed natural to show the credits while the audience followed Juno from the opening scene, through her neighborhood, and to the convenience store where she gets her pregnancy test. This decision allowed us to do something a little unusual for an opening title sequence: focus the sequence entirely on the main character of the film. This allowed the audience to really get a sense of, and get immersed in, Juno’s unique, quirky point of view of the world.

“We flew up to Vancouver during the final week of shooting the film, and were able to get some time with Ellen Page and Jason the day after they finished shooting the movie. We shot thousands of photos of Ellen walking on a treadmill with a high-speed camera from a number of angles. Jason had a guitar with him and strummed out some chords to help get her in the right mind-set. We then took these photos back to our studio and edited together a rough animatic which allowed us to figure out the timing and shot selection for the final title sequence. When we had something that everyone was happy with, we began the laborious process of hand-creating the title sequence.

“Every element that appears in the title sequence was hand-made, including the typography. We used the computer to save us a tremendous amount of time to layer the elements together, but tried as best as possible to adhere to the idea of mimicking the limitations of shooting stop-motion animation from a real-world copy stand.

To create the cut-outs of Juno, Smith and co-designer Jenny Lee printed every frame, outlined Juno, then photo-copied the prints several times to degrade the quality. Each of these frames were then hand-colored and cut out with scissors. “A process that we’ve been wanting to try out for quite a while, and this project seemed like the perfect opportunity to do it.

“Toward the end of production process, we were asked to create the hand-animated season title cards that appear in the film, as well as the end titles, for which we created a custom typeface.”

“The Juno opening title sequence was truly a labor of love for all of us at Shadowplay,” Smith concludes. “Despite the massive amount of time it took to pull this off, we had a fantastic time working on the project and every time we picked up a pen or a pair of scissors we were happy to be working on it. Jason Reitman‘s constant enthusiasm and positive energy inspired us throughout the production process, and we are proud to have been involved with this film.”

After the film was released, Shadowplay collaborated on the design of the music soundtrack and contributed drawings and cut-outs for the DVD packaging.

About Gareth Smith and Jenny Lee

Gareth Smith and Jenny Lee are two motion designers and directors living and working in L.A. In 2011 they formed Smith&Lee Design, a studio that creates “inventive content for film, television and the web.”