Visual Arabia 2013 was born when organiser and creative director Kamil Roxas quickly realized that there was a lack of opportunity to share and inspire between creative cohorts in the Middle East, having personally experienced great creative symposiums and conferences worldwide. On March 20, 2013, a day long gathering of creatives in the field of design, illustration, animation and photography took place for the first time in Dubai. 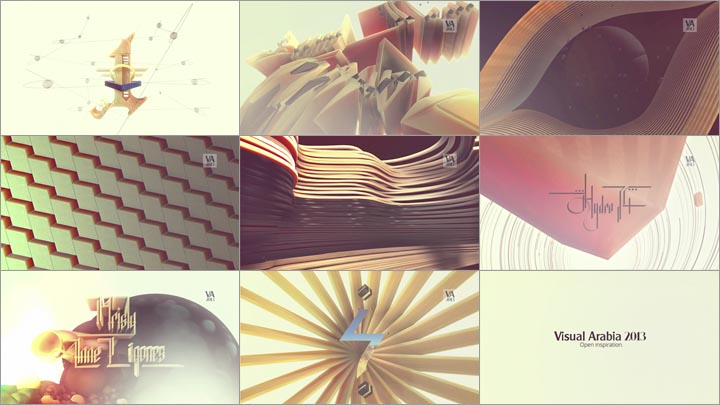 “I’ve always been a fan of MK12 creative studio but was confused when I heard that they were coming to Dubai for Visual Arabia 2013,” Juan Behrens starts off.

“Then I saw the whole list of attending speakers, including Amsterdam’s Onesize, and got excited, seeing Dubai bring all this talent in from abroad and forming an honest approach to promoting the design culture.”

A resident of Dubai at the time, Behrens was invited by Roxas to create the opening titles for Visual Arabia 2013 and in doing so has tried to capture the mystique behind Arabic calligraphy. Behrens has centered the opening titles to revolve around this delicate and traditional artform but has also breathed a decidedly airy and avant-garde twist to its usual appearance. 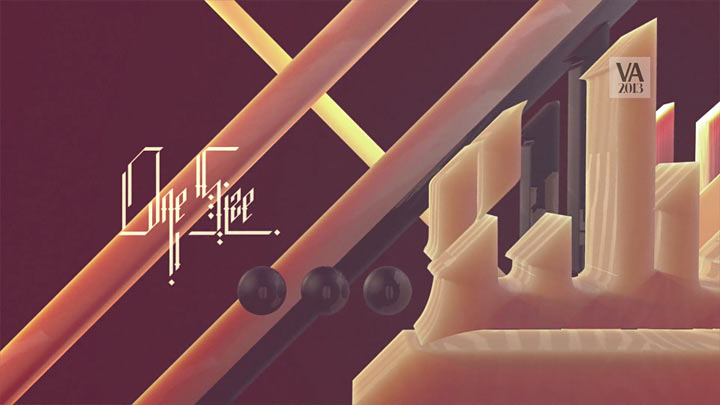 It’s clearly a case of contrasts in the opening event titles for Visual Arabia 2013. The linear is juxtaposed with the curvaceous, modernity entwines itself with tradition, and mathematics complements design. A medley of curves, angles and 3D patterns representative of Arabic characters set off the names of some of the hottest creatives from the Middle Eastern region, depicted in an additional clean and sleek interpretation of Arabic calligraphy.

“Because this was the first event of its type in the region, I wanted to do a title sequence different from anything out there. I wanted to use the concept of exploring Arab calligraphy and explore the level of beauty you see in the holy book [of Islam], and translate it to a cinematographic level. Calligraphy is well respected within the Arab community – for example, you will find more calligraphic work than paintings. That was the culture pool I wanted to base this animated intro on.”

Learning Arabic script seems like a pretty ambitious feat for someone who comes from a completely different culture and wasn’t that familiar with speaking or writing Arabic, but Behrens pressed on. “I attempted to write the Arabic alphabet and practice each letter to get a sense of the strokes so I could make my own. I wanted to make a composition out of it in pen and then build it all 3D, before adding the final touch of guest names in another calligraphic style.” 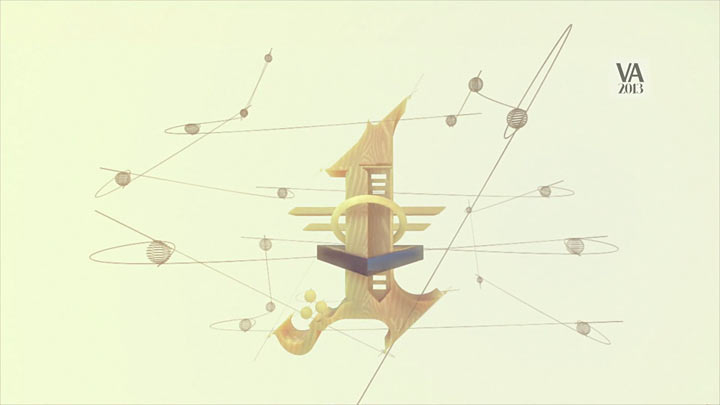 It goes without saying that the amount of effort required to learn to write Arabic script was tremendous.

“It took a lot of practice to reach a level I was happy with – I think I could have kept practicing forever if I wanted to,” Behrens states, adding that he wanted to toy with more complicated executions initially.

“There were other ideas I had beforehand, for example: making the letter for each name in wood or making the names in carpet, but I didn’t have the time or money to pursue these options… I decided to make something doable in the time I had because I was also still working full time.”

Keeping it relatively simple was probably a fortunate choice since it seems Behrens sets himself high standards and works with a high degree of detail when creating.

“I had this habit of making sketches of the comps I wanted to see and animate, so then I would bring the sketch to full design with 3D and compositing,” Behrens reflected. “This process from sketch to fully rendered piece got tricky at some points, especially at the beginning. I’ve never done something with so much 3D in it. I learned a lot though, so it was a good challenge.”

Photos from the sketch book from Carlos Engel 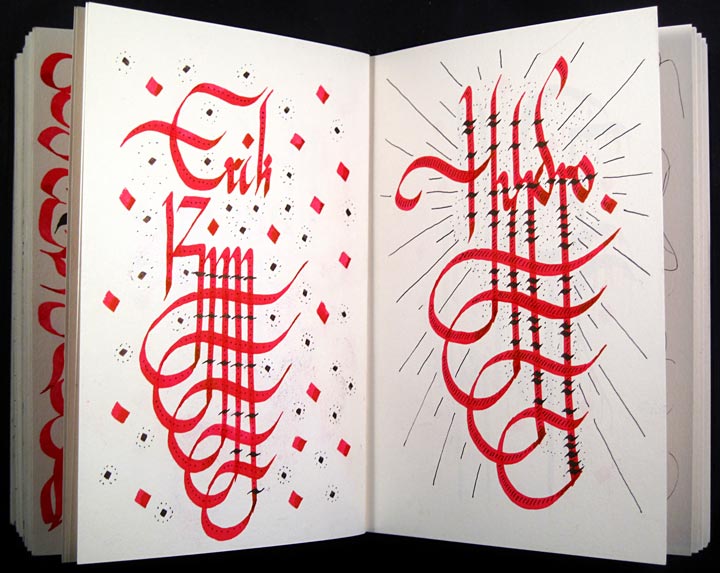 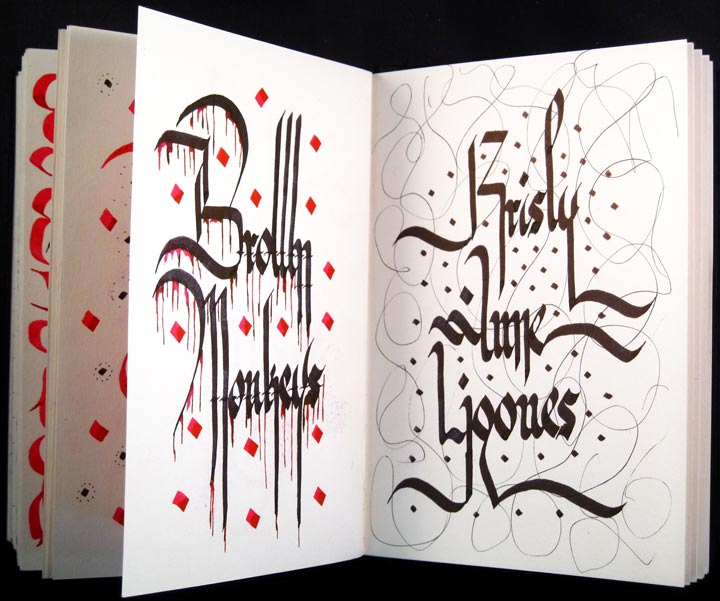 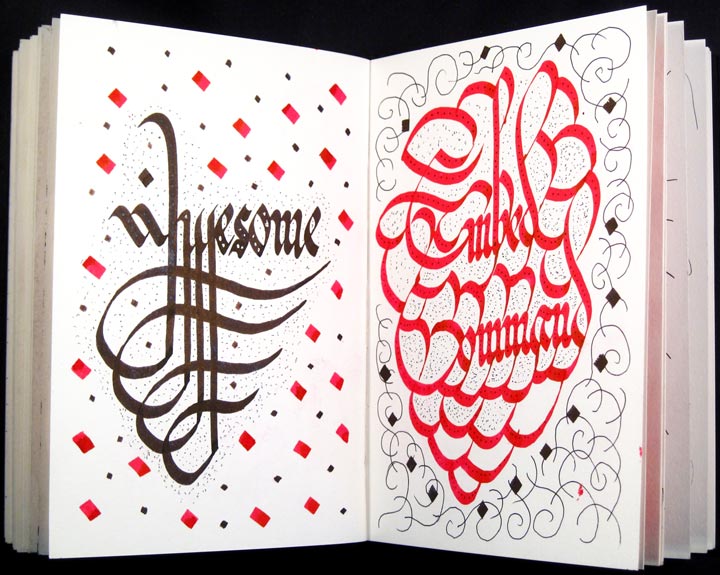 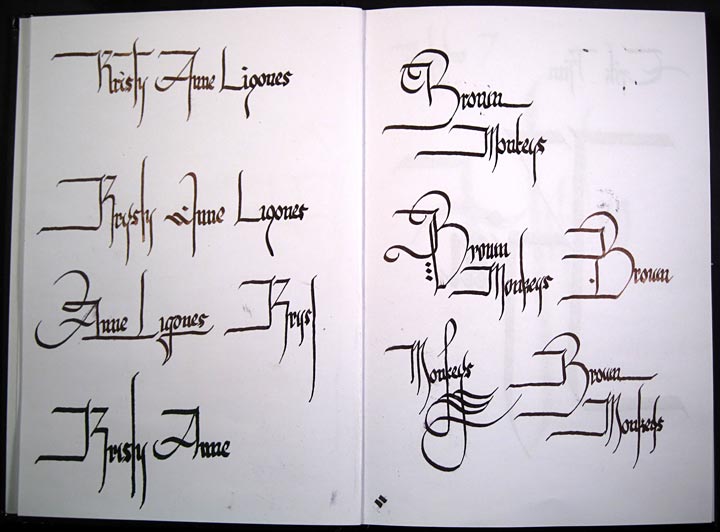 “The typeface was made by Carlos Engel and Bek Cero Treees. They worked together to make it happen. Bek worked on putting together each name and Carlos designed, but it was a mixed workflow. At the beginning, I made all the names with different calligraphies style to explore which would be the best direction to follow. After that Carlos did his thing with his beautiful work, and it all came together nicely.” 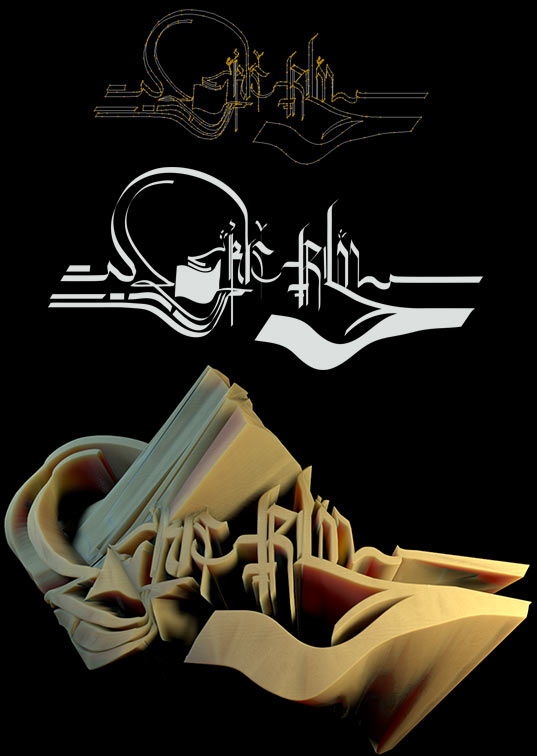 Calligraphy for Eric Kim. “Process from one of the first rough calligraphies that made it to the main piece.”

Collaborating with Australian musician, composer and sound designer Daniel Da Silva (Oceanic Soundworks), the soundtrack to the titles has a sense of effervescence with slightly mechanical undertones.

“Daniel made the audio, I sent him some tests at a very early stage and gave him absolute freedom to something with it, and he made it happen,” says Behrens.

Da Silva adds that, “most of the music was made with samples. Most of these samples were recorded from very common sources [such as] glass, cutlery, pieces of wood and coins, and different devices and small machines, printers, cameras, fans, clocks, etcetera… I also used a couple of special microphones to record the internal sounds of a laptop, an cellphone, a TV, a smoke alarm and a game console. Conceptually, I wanted the whole thing to sound like a machine being set in motion. Stylistically, my main sources of inspiration were Amon Tobin’s albums Foley Room and ISAM.” 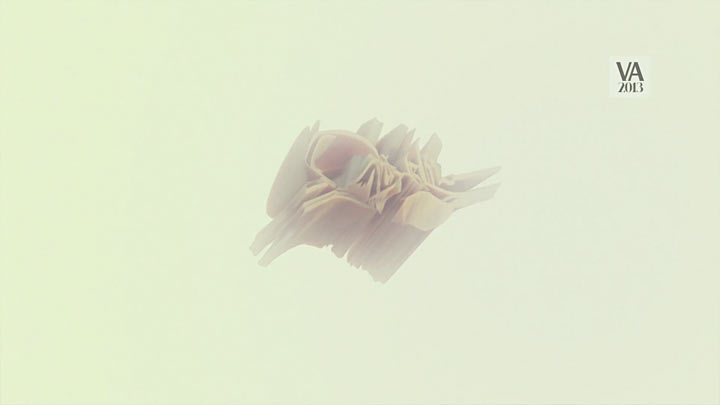 While there were mixed reactions to the titles from audiences, Behren says that he didn’t mind, in fact he quite liked the divide but mostly enjoyed the experience.

“Most people liked it, but really, I just want to collaborate with others again. Some that saw [the titles] for first time were inspired and started to create Arabic calligraphic work shortly after. That was huge deal for me – Nothing beats inspiring others. “

Held at the Dubai Community Theatre and Arts, over 400 like-minded creatives from the region attended Visual Arabia, prompting organizers to call it a success worthy of continuing in future years and extended over a longer period of time, most probably to coincide with Dubai art week. 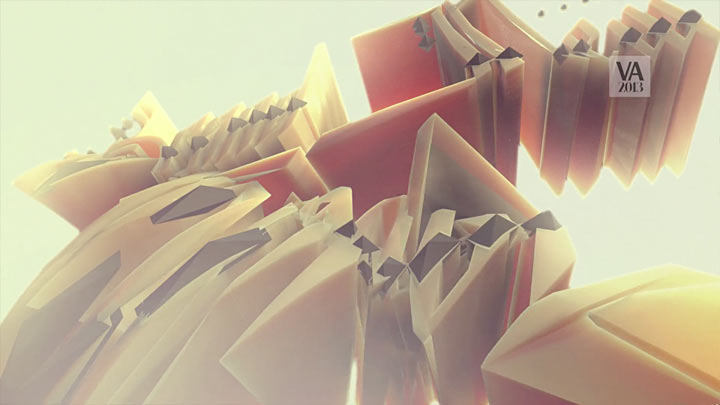 Juan Behrens is an animator, motion designer and illustrator. While the Venezuelan native was completing a Bachelor of Computer Science from the Universidad Nueva Esparta he found himself toying with animation processes. After working in L.A. for a couple of years, he pursued Digital Design at the Vancouver Film School, Canada. Upon completion of his studies he moved to Dubai to take on a Senior Graphic and Motion Design role at acclaimed global agency TBWA Dubai. Now living in Mexico, he is currently freelancing.