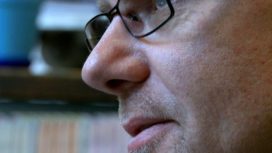 This entire opening sequence is a visual marvel – one can only wonder at how Demy and his crew, including cinematographer Ghislain Cloquet, accomplished it. – J. B. Jacobson *

If you think nouvelle vague equals the radical, documentary-style cinema by the likes of Godard and Truffaut, think again. The Young Girls of Rochefort by Jacques Demy is an homage to the great Hollywood musical. Featuring George Chakiris alongside the French diva-in-the-making Catherine Deneuve, the film and its magnificent opening sequence represents the quintessence of the French film talent of the era, according to “French Fridays” editor Hervé Tissot.

There are title sequences which are particularly dear to me. And for one of them, I have just discovered why. It is attached to childhood memories. When me and my family returned from our summer vacations, the only road back to La Rochelle –my home town on the Bay of Biscay– crossed the transporter bridge over the Charente river before Rochefort. It was the wait, which seemed to last forever, and the anticipation of embarking on this impressive attraction. Crossing the bridge was like going on a ride in the biggest merry-go-round in a real-life Disneyland.

This ingenious work of engineering was a modern mechanical equivalent of an ancient toll bridge, with even a very small hotel-restaurant trying to profit from the waiting travelers. Director Jacques Demy used this device to transform the constraints of the title sequence into a tautological cinematographic element.

The slowness of the machine allows for a magnificent kind of suspended traveling, in complete harmony with the score by Michel Legrand. The moving platform of the bridge becomes a stage for a seemingly improvised ballet by a troupe of young people stretching their legs. The bridge’s metal structure is used effectively to position the typography in the panoramic frame. This inaugural device, which could serve as a metaphor for all title sequences, allows Demy to transship us into his wonderful film. Together with George Chakiris and Gene Kelly, he invites us to join his “young ladies” at the end of the Charente-Maritime. This movie has been restored several times. In 1996 under the supervision of Demy’s wife, director Agnes Varda. And again, in 2010 for the release of the Blu-ray. Much to our surprise, during the 2010 “restoration” Jean Fouchet’s original credits were replaced by generic titles.

THE FILMIC DEVICES OF JAQUES DEMY

The apparent simplicity of the camera movements (long sequence shots suited to the  choreography) is a form of homage to the great Hollywood musicals. The presence in the film of two superstars of the genre attests to this –with Chakiris still basking in the success of West Side Story.

What makes Demy‘s cinema modern is that he, like all filmmakers of the French “new wave,” films on location, much like the impressionists who painted “after nature,” not in the studio. They want us to see the poetry of reality by looking for an apparent simplicity.

It is with the same evidence that Demy conceived another masterpiece, the credits of “The Umbrellas of Cherbourg.”

The title sequences for “Les Demoiselles” and “Les Parapluies” represent the quintessence of French talent of the era and mark the beginning of the successful collaboration between Jacques Demy, Jean Fouchet and composor Michel Legrand. These opening titles do not credit Fouchet, but according to his wife Jacqueline, who we interviewed recently, the title designer collaborated closely with Demy and Legrand on the production of these two landmark French title sequences. 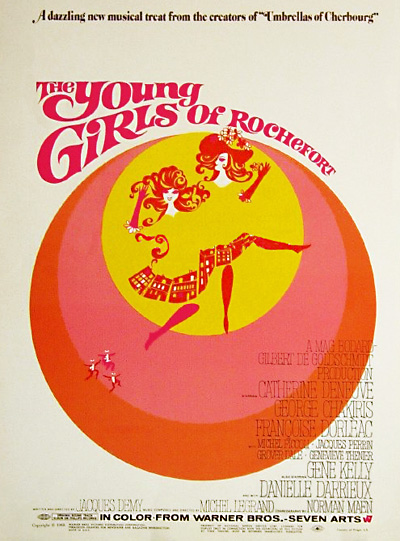