Not exactly a remake, this 2006 take on the successful original Pink Panter movie from 1963. What happened after that first film is a unique feat in film history. For the first time, and the only time, an animated character created for a title sequence becomes a big star in its own right. The Pink Panther soon featured in a series of short animated films and its own TV show and became more popular than the film series for which it was created. 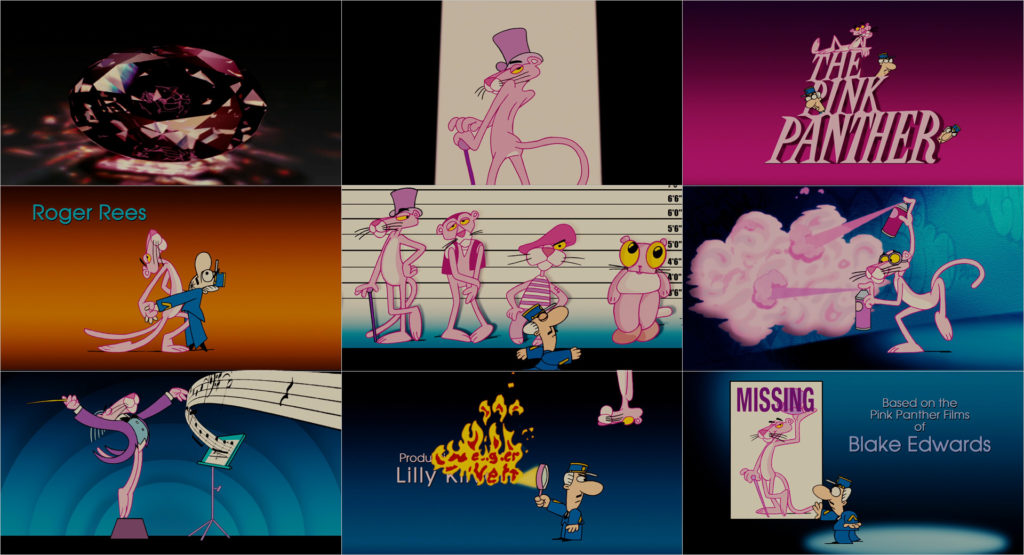 Bob Kurtz wrote scripts for some of the original Pink Panther short films in the first year after it was created.
Bob Kurtz: “I came in after the third Pink Panther was written. I was a designer, writer and storyboard artist and I was very young. I wanted to work for Friz Freleng because I loved his work.”

RV: Is that why they asked you to do the Pink Panther opening titles?
Kurtz: “They had run into some trouble and decided to bring in three companies. Of course I do comedic film titles, but I never told them I did the shorts. The executive producer knew me from other projects.”

“When I was brought in, they had already done one title sequence in CG. Though the director liked what had been done, the rest of the producers felt that they had lost that Pink Panther flavor. They put up a competition, and at that time I won.”

“The first Pink Panther film title sequences were done by Friz Freleng. Richard Williams did a terrific job too. He’s a wonderful filmmaker. The Pink Panther titles really opened the door for animated title sequences. There was nothing simple about it, where before, titles were very simplistic. Very nice sometimes, but there was very little animation. The title sequence of the original Pink Panther film [1963] is about seven-minutes. You never get that anymore.”

RV: Did you spend a lot of time studying the character?
Kurtz: “No, and I say that as a designer. Normally I design my own characters. What I did with the Pink Panther was, I modified him a little bit. Not that you can tell on the screen, but I made him animation friendly, so the animators could really get hold of him. I did small things. I opened up his eyes and there are certain proportional elements that I played with. But for me or for my animators it was not hard to draw.”

“I wanted to do a fuller animation than we’d seen in the last few years when they didn’t move him that much. I didn’t stay with the book of the character and the poses. I sort of invented my own poses. It’s a character that is very clever and who is a prankster and with that in mind I did the poses and everything else. I didn’t want to limit myself by what had been done before.”

“And at the same time I wanted to pay homage to Richard William‘s version of the character. There’s a wonderful history of all the films and I really wanted to honor that silliness and that graphic quality. It’s a very rich tradition to follow. It was like: ‘Great we’re doing the Pink Panther! We didn’t originate it, but maybe we can do one of the better ones’.”

“Henri Mancini‘s music for the Pink Panther is so wonderful and we married the animation to that music. I mean. You can’t move it a frame. And guess what? They moved it more than one frame. But our version was done to the beat. The accents are so important. I think the track is about half of the film title’s impact.”