The animated title sequence of the 1992 comedy Honey, I Blew Up The Kid features a series of “playful hurt gags” designed and conceived by Robert Peluce and directed by Bob Kurtz. 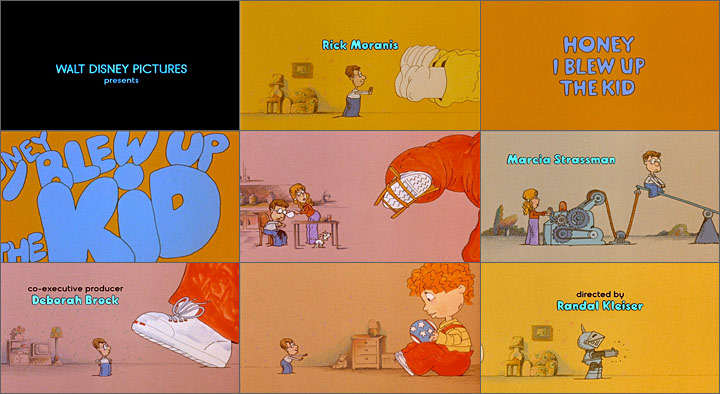 Bob Kurtz: “At that time, I had a designer working for years with me called Robert Peluce. For Honey, I Blew Up the Kid, we both wrote sequences. It’s really his design on that one, and I directed. It was so much fun to do. I hate to say ‘playful hurt gags’.”

“For a film from 1992, a title sequence of three minutes is unusually long. Even though this opener is clearly meant to entertain the audience and make them laugh, as much as present the main credits.”

Penelope Gottlieb‘s chose a typeface with rounded sans-serif letters that seem inflated like a balloon or a bubblegum; the perfect fit for this animation.

Kurtz & Friends Honey, I Blew Up The Kid on Wikipedia