The title sequence for Four Rooms was initially going to be a short film, but things didn’t quite turn out that way, as Kurtz recounts: “Quentin [Tarantino] went to pick up some awards in France. Another one of the directors came in and chopped my titles all up. They took about a minute and a half out.” 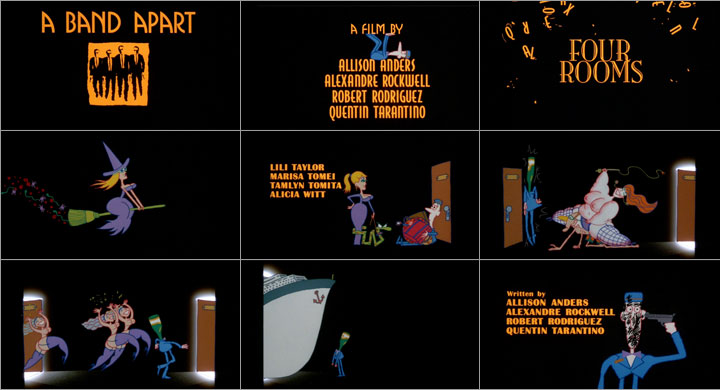 “Originally, I was going to do these titles as a short that ran over four minutes,” Bob Kurtz tells me in a phone interview. “Quentin Tarantino wanted it like that.”

“When they were mixing the film, Quentin went to pick up some awards in France. Another one of the directors came in [the movie has four directors] and chopped my titles all up. They took about a minute and a half out. Quentin was the one who asked me to come in to do it, so it was too bad that somebody else was left in charge.”

“Quentin later told me that Harvey Weinstein, who is the producer, wanted to put the titles at the end of the film. I asked why. He said, because Harvey didn’t want them to be anywhere near the first sequence, because it was really bad, which is, I guess, a really nice compliment.”

“In the titles for Four Rooms, I made a big thing about the bellboy’s cap; because in the original, the main actor does a very weird take in the first few seconds of the film, when he’s given the cap. Based on that, my transition was going to work. But they cut this whole sequence out, so the stuff I did on the cap didn’t really pay off.“