The kids spy movie Cats and Dogs: The Revenge of Kitty Galore left most critics unimpressed (Metacritic) score 30/100, which could explain why the title sequence, made by Imaginary Forces, undeservedly slipped past everyone’s radar. Well, almost… 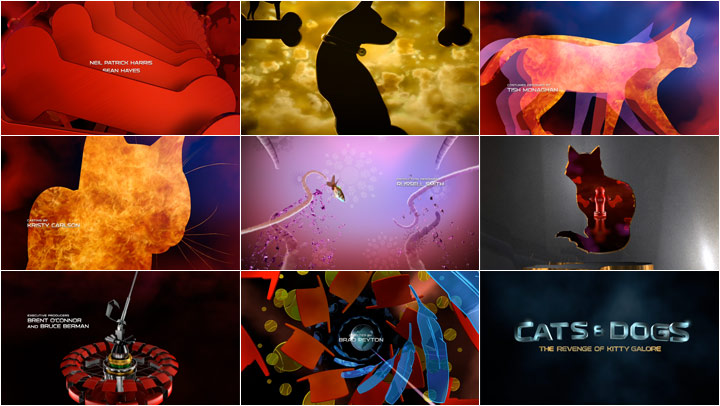 It’s arguably one of the better Bond-inspired title sequences we’ve come across. An uncompromisingly stylish visual feist, with cascading canine and feline motifs rendered in luscious hues offset by contrasting blacks. The gadgettery, explosions and laser beam action reflect the movie’s spy theme. Add to that the theme song by Dame Shirley Bassey and the 007-reference is complete.

In this sequel to Cats & Dogs, the eternal battle between cats and dogs is temporarily put on hold, as the former arch enemies join forces to combat an evil hairless cat by the name of Kitty Galore and prevent her world domination scheme. “Brad Peyton, the director, wanted the sequence to convey the idea of an international network of spy dogs and spy cats,” explains Imaginary Forces‘ creative director Michelle Dougherty (The Number 23). “And of course one of his references was to the Bond films.”

STORYBOARDS
The storyboards below clearly illustrate how far apart the original boards and the final title sequence are. “We decided to have a lot of fun with the different ways we could play with the cat and dog motifs,” Dougherty says. “The visual style of the sequence evolved quite a bit, as we tried to incorporate iconic elements from the film, as well as some of the specific characters.”

Dougherty pitched a few times, before it awarded. First in May 2008, before shooting had even started. But took more than a year before she settled on what direction to go with the director. 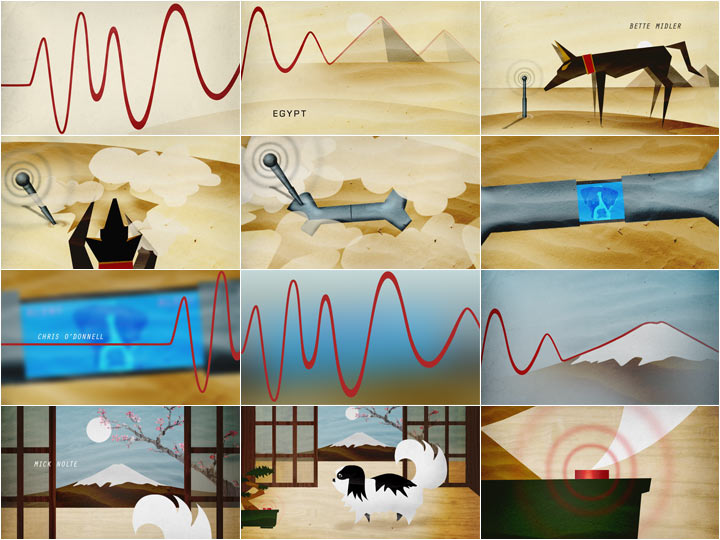 These two initial look frames, designed by Joan Lau and Brett Krauss have a much lighter tone. 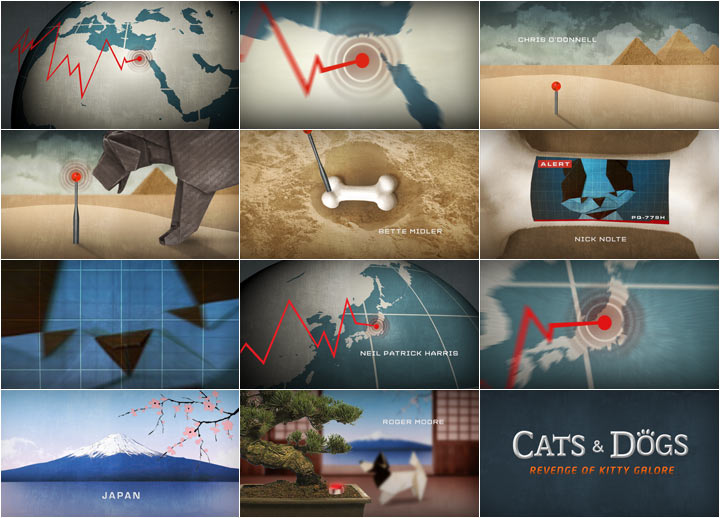 In the two storyboards above “we were using the audio waves which the main villain, Kitty Galore was going to use to take over the world. We used it as a transitional device that leads us from country to country. ”

The board below, presented by Watch the Titles as a slideshow, was created after the ones above. Dougherty comments, “The director wanted this to feel like a Bond title. The palette is very dark in tone and moodier than the final sequence.”

“After we presented this, the director reminded us that this was a kids movie, so we changed the color palette to this brighter, happier version, but we still wanted to keep the intensity, so we kept a lot of black in. He also really liked the metallic textures.

“This board is prior to us adding the type. The designers were Charles Khoury, Brett Krauss, Joan Lau and myself.”

This sequel to Cats And Dogs is a 3D movie. What was that like, creating a 3D title sequence?
“The movie wasn’t created in 3D. Everything was converted after the flat version of the film was delivered, including our sequence. We were skeptical, but the conversion turned out really well. We did deliver the end titles in stereo 3D.

“During our design phase we tried to think of fun ways to take advantage of the 3D. When you are making things 3D you have to consider a few things, such as movement. Things work better when they are suspended in time rather than moving fast. Also, too much convergence gives the audience “eye strain.”

Most of the sequence was built in Maya, Cinema 4D and After Effects.

Michelle Dougherty is an Emmy-winning designer and an art director who worked with Imaginary Forces. At IF she worked closely with Kyle Cooper for many years. “I was a designer, then art director on his team,” says Dougherty. “I consider him my mentor.” Dougherty studied at the Art Center College of Design, a leading graphic and industrial design college located in Pasadena, California. She also teaches a class there called Motion Communication.

4 responses to “Cats and Dogs: The Revenge of Kitty Galore”