Title design is no longer confined to the medium that first introduced it: Film. As the technology for creating stunningly complex moving images keeps evolving, other ‘media’ are adopting the format of the title sequence. Festivals and events are creating them to introduce speakers, crew or partners. And the world of games—especially the big budget titles—are increasingly incorporating elaborate title sequences that are almost indistinguishable from those made for Hollywood movies. Sony Playstation‘s hugely popular game title God of War 3 takes it one step further. They turned to Imaginary Forces not just for the title sequence of their flagship title, but asked them create the in-game flashback sequences. 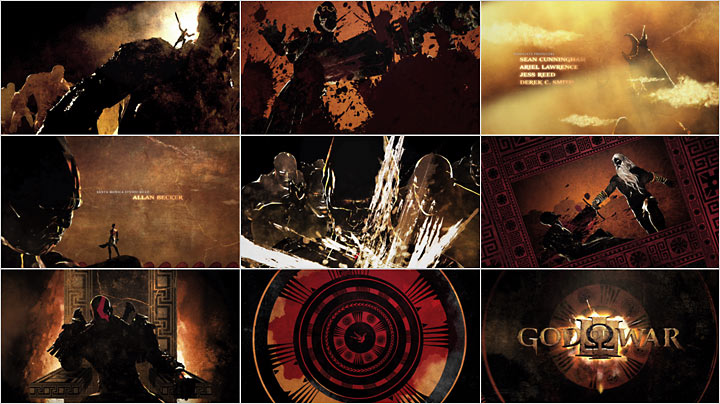 God Of War III is the latest installment of the game series. The epic action-adventure, which is loosely based on Greek mythology, revolves around “the man, the legend” Kratos—a Spartan warrior. Kratos sets out to kill Ares, The God of War, in order to come to terms with his troubled past. The game’s action-adventure sequences are intercut by a series of cinematic flashback scenes that reveal the tragic events from Kratos’ past and his motivation to kill Ares.

The main title sequence, the flashback animations, and the end credits were designed and produced by Imaginary Forces. IF’s designer/director Karin Fong, who previously designed sequences for Terminator Salvation discusses her experiences designing her first game title sequence and provided us with some insightful answers regarding the differences and similarities between designing for film and designing for games. 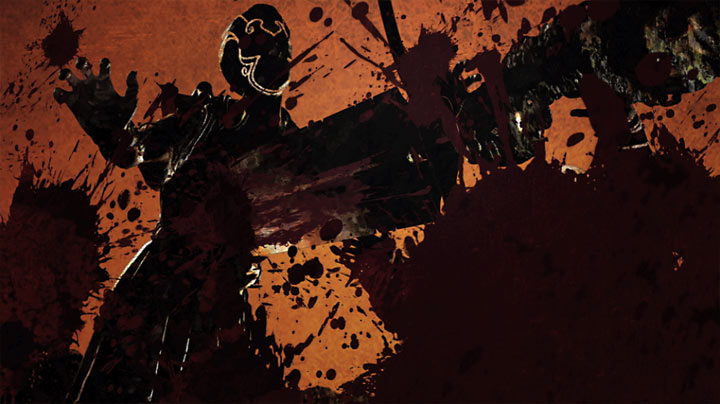 Are you a gamer?
Karin Fong: “No, so I had to learn a lot about them! Fortunately many people on my team are gamers and also fans of the God of War series.

Why do you think you were approached to do the title sequence and cinematic flashbacks for this game title? Couldn’t Sony’s Santa Monica Studio who developed the game design the sequence too?
“Stig Asmussen, the game director, wanted sequences that would visually stand out from the gameplay. The cinematics replay events from the past, so it makes sense to have a different lens on these segments, and not have them confused with the present story. Stig particularly liked a painterly, handmade style, and referenced the end titles we created for The Mummy: Tomb of the Dragon Emperor, where the language of Chinese brush painting was used to recount the film’s story. 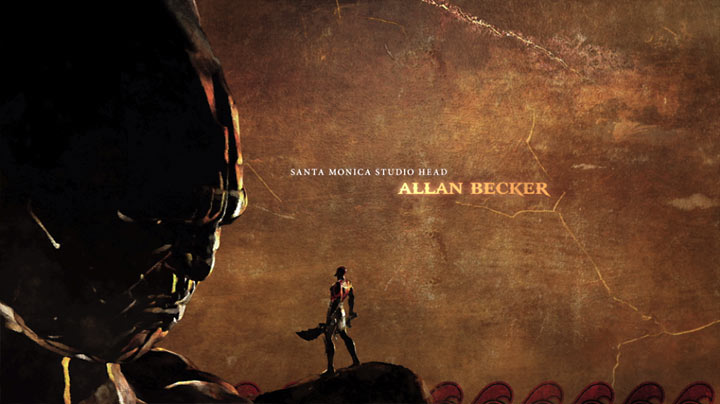 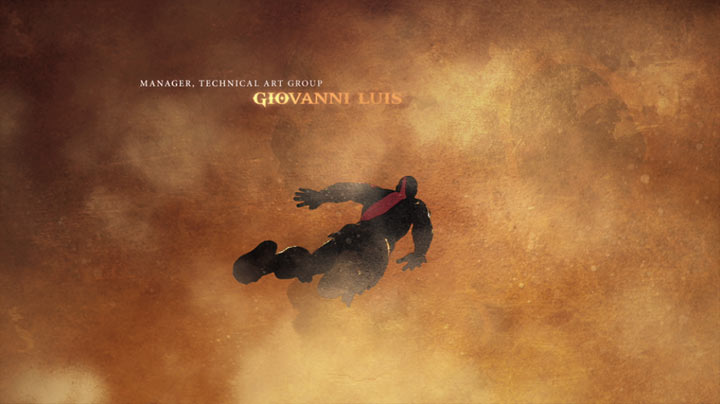 “Because the player is flashing back to an interpretive view of reality, he wanted us to play with the kinds of transitions we often use in our filmic work. With a stylized point of view, we could make surprising camera moves and scale changes to take us from event to event. For instance, at one moment a silhouette could be a face, the next, a landscape. We could take advantage of a non-literal time and space in a way that you can’t during he course of play. In that way, the flashbacks could differentiate and elevate these memories into scenes that were more mythic than the “normal” play.

How did you prepare for this project?
“I began by reading the script… Until then I didn’t realize games had such long scripts! But of course they do—there’s a lot of story to plot out—hours’ worth. I had to understand the key moments Stig was asking us to depict—what they meant to the whole mythology, why certain scenes would resonate with the player.

“And of course I had to dive into the previous two games, and with that I had a lot of help from all the people on our team who were already fans. I began to call Theo Daley, one of the lead designer/animators, our resident professor—I would rely on him to make sure I understood the history of the game and he was key in figuring out what liberties we could take with our “retelling” of these events.

“Then, as with any project, it’s about diving into the material that makes the story and its atmosphere unique. In this case, the characters and plotlines are loosely based on Greek mythology. Arisu, one of our lead designers, and I looked at a lot of Greek art to see how the Greeks depicted their gods and heroes. This influenced the stylization of key props and events. 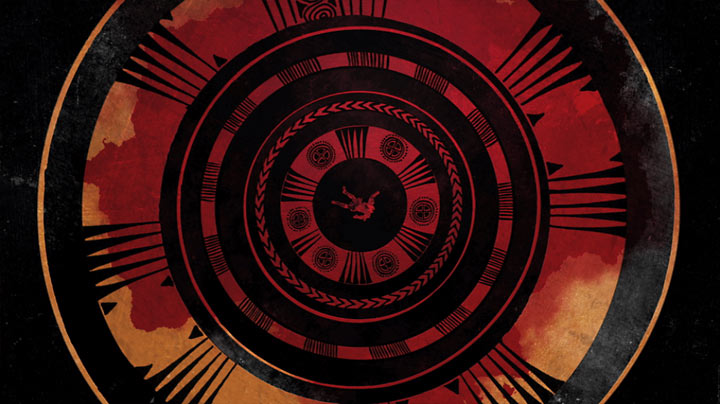 For his title sequence for Killzone 2, Joost Korngold had access to the original 3D game models. Did you have access to character models?
“We did have access to several game models, which was great. But often our needs were very different than the game’s needs, so our animators often had to re-rig or augment and customize the models.”

Could you elaborate on that? The visual style of the main titles and the flashback sequences you designed have an almost painterly quality. They stand out significantly from the more realistic 3D look of the game.
“Yes, the design of the titles and the sequences are meant to stand as flashbacks, through the lens of memory, and not be at all confused with the “real-time” happenings of the current game.”

How did that ‘look’ come about?
“We took a lot of inspiration from the pottery of ancient Greece. We are, after all, immortalizing the main characters and events from Kratos’s life—replaying them in iconic form—and wanted a language that related to the story’s roots in Greek mythology. Stig was into having us add textures and imperfections to the animation so it was almost as if a frieze or scene on a Greek vase came to life, complete with cracks in the glaze or that dusty terra-cotta texture. To add to that idea, we used motifs, borders, patterns and ornaments found in Greek artifacts, which allowed some striking graphic moments.

“The way the Greeks developed “black-figure” and “red-figure” techniques was specific to their antique artwork, and we riffed on that idea. Rather than having straight silhouettes, certain details appear lit to give some outlines to the forms.  We were dealing with using 3D moves and models as well, so it became a play between this extremely flat language and dimensional elements, with the hope that the tension between the two made for compelling imagery.” 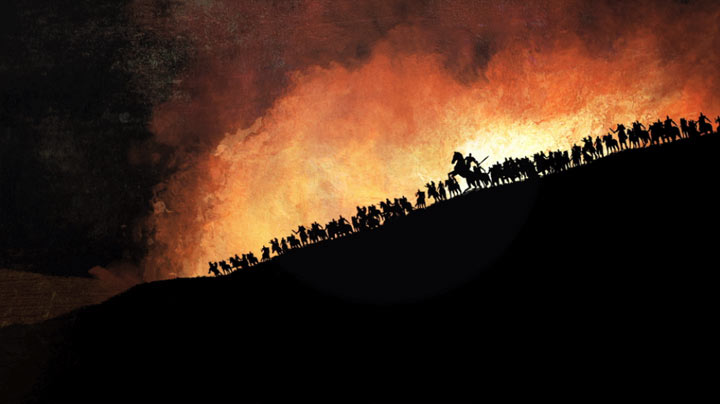 Do you think there is more creative freedom in terms of visual style in big budget games nowadays?
“Working on the cinematics of GOW 3 was a great creative experience. For that, I have to credit Stig, the game’s director, for constantly pushing us “to do what we do” and create a visual language that complements the visuals of the gameplay, rather than duplicating it. I am hoping that others will follow suit in both games and in films, and see that introducing sequences that are more interpretive or impressionistic can add to the drama of the story and make the experience more engaging. Many times an abstraction of a story point can read more memorably, than if it was depicted literally. As games move more towards movies and vice versa, there seems to be an excitement of the techniques used for one spilling over into the other—witness the emergence of machinima, for instance.”

Developers of big budget games are adopting the language of film and are delivering increasingly cinematic experiences. Examples are the inclusion of title sequences, the use of elaborate musical scores, editing, and narrative cut scenes.
“These games are epic—their releases are events in their own right. In some cases, the storytelling capabilities and technology has become so advanced that they equal the level of impact and visceral qualities of film. The cinematic crafts help push games in this direction… Music is a huge influence in creating emotion. Editing, as in film, is an underestimated art, and essential in creating tension and surprise. All of this contribute to a more immersive, bigger experience. As for titles –in games, as in film, when you begin, there’s a certain appetite for diving into an alternate world, a chance to leave reality behind. Titles help satisfy this anticipation and provide a wormhole into the story.

When asked about the biggest difference between designing for film versus designing for game, Fong says that she was thrown by the time frame of the narrative.
“At one point I was discussing a repeating motif with Stig; I was concerned that we were repeating a certain idea too similarly to another sequence… He reminded me that during the game, these moments would be mostly like four or five hours apart! Working in film and TV, I had become so accustomed to narratives unfolding in a certain timeframe, at a certain pace. Working on a game, you see how a story and its ideas are sustained over a longer time period, to make a virtual environment that your audience returns to.” 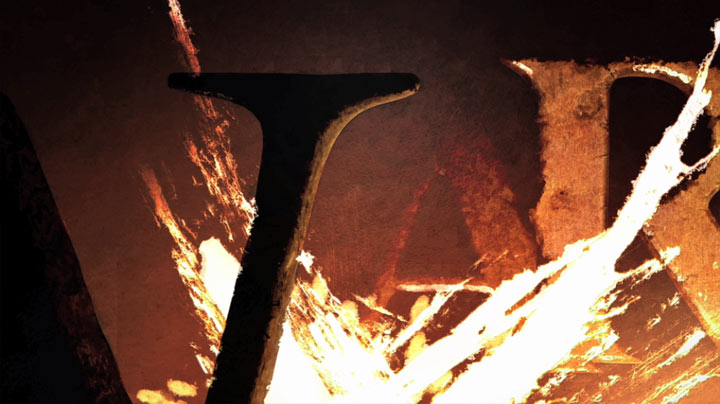 2 responses to “God Of War III”