A Fistful of Dollars

After the Pink Panther films, it took years before the next title sequence featuring animated characters would appear. Until City Slickers. The film titles for City Slickers were designed by Wayne Fitzgerald. The idea for the character of the ‘cowboy who shows no pain?’ came from Bob Kurtz.

Bob Kurtz: “City Slickers probably had the first animated title sequences in a long time after the Pink Panther of 1963. There was a title designer named Wayne Fitzgerald, who doesn’t do animation. He doesn’t do ‘fun’. He called me (we worked before) when he was doing the styling of the words City Slickers, and he wanted to know if he could have some funny rope gags. So I did about four or five.”

“Then I met Billy Crystal, and he said, “Can I have an animated character?” So, on the spot, I mimicked for him a cowboy who shows no pain. I kind of rode home town rodeos and I watched guys go out getting up on a horse. The rule is, whatever you do, when you get crushed, don’t show any pain. So I did that and Billy laughed, and said, “I want that guy!”

“Ron Underwood, the director, just left me and Billy alone and I wrote the jokes for him. At my first presentation, Ron said, “Bob, have you seen the film?” I said, “No”. He says, “Well, you’d better see the film, because you’re using jokes in the film!” I went and saw the film and I was like, “Oops.” [Laughs]. So I went back and did jokes that implied what was in the film. Billy was great to work for, and of course he called me right back when he was doing City Slickers II.”

“We are real proud of the City Slickers titles. But the first audience I sat in on was the crew at a crew screening. I was there with Wayne Fitzgerald. Every time a name came up they cheered. They weren’t laughing, they just kept cheering. Wayne turned to me and said, “This is what happens at all the cast screenings. They’re only interested in the names.”

RV: Why did they want animated titles?
Bob Kurtz: “At the beginning of City Slickers there’s a bull fight and Billy’s character gets gored. Then it’s about half an hour before he gets to the dude ranch. They needed to explain to the audience why it’s a western. So, that’s what I did. I created the back-story.”

“With title work, we’re really not given much time. You probably get that from other people too. Nobody knows how long it takes to do animation. City Slickers was so fast… I was doing layout. (Sometimes I layout my own films, I did on Pink Panther). With City Slickers, I boarded it, wrote it, laid it out and directed it. I’m working late at night and with the TV on. The coming attractions are saying when City Slickers is going to open. I’m there laying out the film, and they’re giving the dates! I almost had a heart attack. It wasn’t a matter of months. It was just a couple of weeks. I don’t know how, but we made it.” 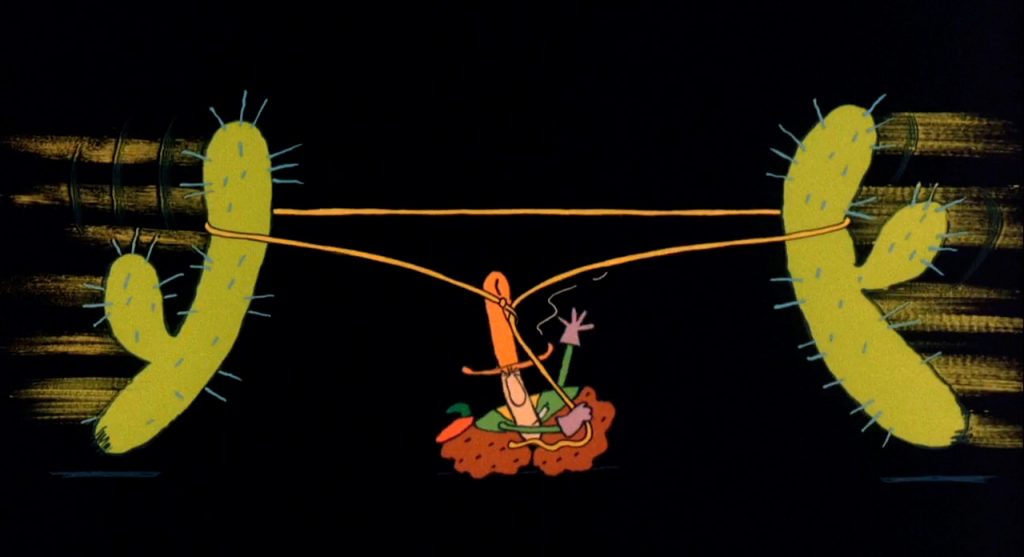 Ron Underwood, director of City Slickers said about Bob Kurtz‘ animated title sequence: “It gave the opening of the film the perfect lift. You can always count on the F word with Bob’s work: Funny! But it’s the ‘H’ word that makes it so memorable: Heart!”